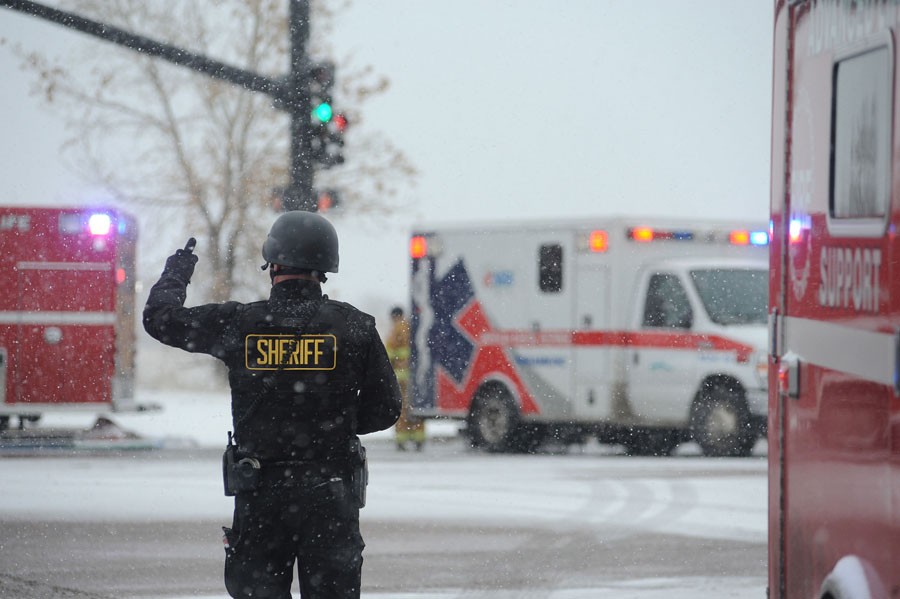 Mr. Dear traded gunfire with the police until they were able to persuade him to give up, according to police spokeswoman Lieutenant Catherine Buckley. The five hour standoff began around 11:30 in the morning, and continued until the police convinced Mr. Dear to surrender. Following his arrest, Dear reportedly told authorities “no more baby parts,” which may have been a reference to videos posted during the summer by anti-abortion groups of officials discussing the use of fetal organs for research.

The entire shopping area surrounding the clinic was transformed into chaos while Mr. Dear was inside the building and armed with a semi-automatic rifle. Shoppers and employees inside of the shopping center were ordered to stay away from doors and windows as tactical officers stood guard with guns in hand. Ambulances lined up on nearby streets, awaiting the large amount of anticipated casualties and injuries.

Colorado Springs Mayor John Suthers spoke with reporters at a news conference following the shooting. “The perpetrator is in custody,” he said. “There is a huge crime scene that has to be processed, and we have to determine how many victims there are.”

Police spokeswoman Lieutenant Buckley said the gunman carried several suspicious items into the clinic with him, and investigators were trying to determine whether or not they were explosives.

When searching for possible motives, investigators looked into Dear’s past and discovered that he had a very odd history. An independent art dealer, Dear was born in South Carolina where he lived most of his life until he moved to Colorado in 2014.  Mr. Dear spent the majority of his life living in trailers and cabins, and was living in a trailer at the time of the shooting.

Mr. Dear claimed to be a follower of Christ, despite the fact that he committed numerous counts of violence and adultery against his three wives and spoke out hatefully against other people both in person and on the internet. Many of those who knew Mr. Dear personally said that he was a very angry man, and that he could turn into a harmful hazard in a matter of minutes.

“He claims to be Christian and is extremely evangelistic, but does not follow the Bible in his actions,” Barbara Micheau, one of Mr. Dear’s former wives said during their divorce proceeding. “He says that as long as he believes he will be saved, he can do whatever he pleases.”

She also told NBC News that Dear had targeted a Planned Parenthood clinic in the past by putting glue on its locks, and informed them that he had a violent history.

“Turn to Jesus or burn in hell…Wake up sinners u cant save yourself U will die an worms shall eat your flesh, now your soul is going somewhere,” the disturbed Mr. Dear wrote on an internet forum recently.

Dear made no secret of his hatred for abortion.  He was known to describe the Army of God, a loosely organized group of anti-abortion extremists that has claimed responsibility for a number of killings and bombings, as “heroes”. Dear is also alleged to have made statements against Obama in the past, which lead the United States Secret Service to dispatch agents to investigate him.

Dear appeared before a judge on November 30 and was charged with murder in the first degree. He was ordered to be held without bond, and could face life in prison or the death penalty for his crimes. The judge further ordered all court documents sealed.