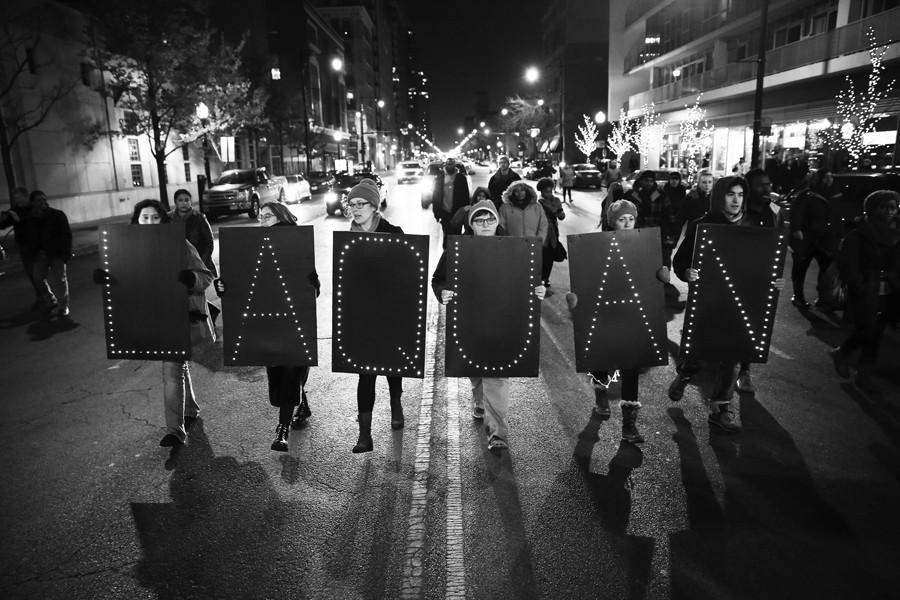 Thousands of protestors peacefully took to the streets of Chicago in response to a released video of the fatal shooting of 17-year-old Laquan McDonald by a caucasian police officer. More than a year after the events occurred, the video was released to the public and murder charges were filed against Officer Van Dyke.

In contrast to the Ferguson and Baltimore protests where riots and looting took place due to the outrage, the people of Chicago chose a more civil and peaceful way of expressing their displeasure.

“No one understands the anger more than us, but if you choose to speak out, we urge you to be peaceful, don’t resort to violence in Laquan’s name. Let his legacy be better than that,” McDonald’s family said.

The protestors marched through the streets of downtown in a tense but ultimately violence free manner.

The grainy nighttime dashboard camera video that triggered the protests upon its release depicted the young man running, then walking past a few officers in the middle of the street when he was shot. He spun and fell as more bullets struck him. He was shown lying on the ground, trying to move, when he appeared to be shot several more times before an officer ran up and kicked an object away from his body. No officers were shown offering any assistance to Laquan during these events.

According to witnesses, Laquan was carrying a three-inch folding knife but never spoken a word to Officer Van Dyke or any of the other officers at the time, nor had he made any menacing or threatening moves toward the officers. Laquan was shot 16 times even after stepping slightly away from the officers.

The protestors blocked roads and intersections, chanting outside of a police station, wielding banners that cited the names of those killed by police officers.

More than a year after the shooting, Officer Jason Van Dyke was charged with first-degree murder and the video of the shooting was to be made public by order of the presiding judge.

Many of Chicago’s residences were relieved at the peaceful response.

“While on the whole last night’s demonstrations were peaceful, a few isolated incidents resulted in five arrests related to resisting arrest and assaulting police officers,” a police spokesman said.

Some community leaders wanted to call for more demonstrations and more action. They proposed a Black Friday boycott of the city’s famed shopping district known as the Magnificent Mile.

Before the release of the video, Mayor Rahm Emanuel and Garry McCarthy, along with other community members and the Chicago police superintendent, said they expected more violent demonstrations and responses and urged people to avoid being violent.

“It’s fine to be passionate, but it is essential that it remain peaceful,” Mayor Manuel said.

Officer Van Dyke had been with the police force for 14 years and was the first Chicago police officer in years to be charged with murder in an on duty shooting. Originally, the city did not want to release the video so they could conduct a private investigation of the matter.

On Twitter, the NAACP said that it was unacceptable that it took over a year for the video to be released. But Laquan’s family, who had opposed the release of the video, issued a statement through their lawyers calling for calm.

The Cook Country state’s attorney, Anita Alverez, acknowledged that she wanted Officer Van Dyke to be charged with murder even before the video was released. Alverez defended herself against suggestions that the investigation had taken too long. She claimed that she had reached a conclusion long before the charges were warranted. Officer Van Dyke has been held with no bail and if convicted, will receive a sentence of 20 years to life.

Family members of McDonald thanked those who marched in Chicago demanding justice for the 17-year-old’s death, calling for change “from the top down.”

“I think that change is needed. And change needs to start not just from a local level… but I think change needs to start from the top down,” Pastor Marvin Hunt, McDonald’s great-uncle, said. “Because what we’re feeling in Chicago is the real feeling of America in itself and that is injustice toward people of color.”