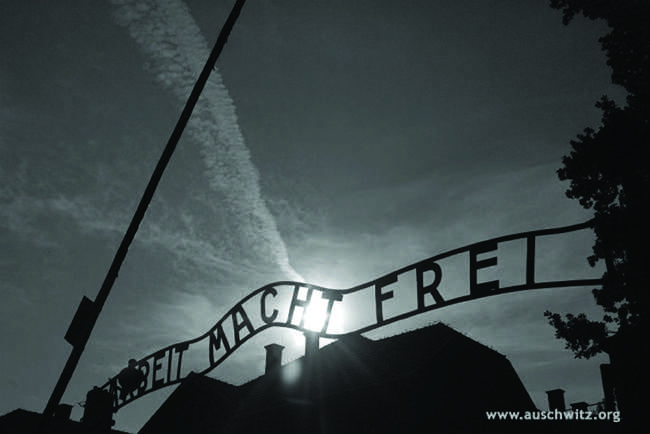 January 2015 marks the 70th anniversary of the liberation of Auschwitz, the largest concentration camp run by the German Nazis in World War II. The death camp was located in southwestern Poland and consisted of the original camp, Auschwitz I, and 45 satellite camps surrounding it.

In the beginning, Auschwitz was created in order to hold Polish political prisoners during the war. Starting in 1942, Nazis began transporting Jews to the camp. Along with the Jews, Auschwitz held 150,000 Poles, 15,000 Soviet POWs, or prisoners of war, 23,000 Romani and Sinti, and well as many Jehovah’s Witnesses, homosexuals and people of other nationalities. In the camps, many were killed in gas chambers, and the ones who were not killed often died from starvation, diseases and forced labor.

Seventy years ago, in mid-January 1945, Soviet forces began approaching Auschwitz. During this time, the Nazis started evacuating the prisoners and forced approximately 60,000 prisoners to march west from Auschwitz in a death march.

The prisoners were forced to march to Wodzislaw, a city in the western part of Upper Silesia. When travelling, anyone who fell behind or could not continue on the journey was automatically shot by the SS guards. The prisoners during these marches also suffered from the starvation, cold weather and exposure, causing over 15,000 people to die.

On January 27, 1945, the Soviet army entered Auschwitz and liberated more than 7,000 remaining prisoners who had been left, most of whom were ill and dying. Estimates have shown that at 1.3 million people were transported to Auschwitz during the time period of 1940 and 1945 and, of these prisoners, at least 1.1 million were murdered. 90 percent of the fallen people were Jewish. January 27 is now commemorated as the International Holocaust Remembrance Day.

Many survivors of the death camp later wrote memoirs, explaining in depth their experiences during the war in the camps. Eva Mozes Kor, a child survivor of Auschwitz, also explained her story. At the time, she was just ten years old. She was one of the several hundred children taken during the war.

“We ran up to them and they gave us hugs, cookies, and chocolate,” Kor said. “Being so alone a hug meant more than anybody could imagine because that replaced the human worth that we were starving for. We were not only starved for food but we were starved for human kindness. And the Soviet Army did provide some of that.”

This year, on January 27, over 300 Holocaust and Auschwitz survivors gathered in front of the Death Gate of the former Auschwitz II-Birkenau in honor of the 70th anniversary. The current President of the Republic of Poland, Bronislaw Komorowski, welcomed the guests and addressed the prisoners.

“Everyone of you is the guardian of the memory of Auschwitz,” Komorowski said. “Every Survivor who was saved from the camp, the hell of hate and violence. You are the most important guests of the event today. Being the guardian of memory is not only about protecting the memory about the crime about itself, but also about reflection of its sources which lay in people, nations, ideologies and policy of states. This is memory about totalitarianisms, xenophobia, anti-Semitism which were the foundations of the 20th century collapse of our civilizations.”

Other survivors, including that of Halina Birenbaum, Kazimierz Albin and Roman Kent, also gave several important speeches about their experience.

Komorowski reminded the survivors of one last important message before giving the attention over.

“It is our duty, the duty of Europe and the world to remember because of those who suffered here, because of You, who survived the camp horrors. But it is also our obligation to remember for ourselves, for our future,” President Komorowski said.